Located a few steps from Basilica di San Marco,  Ducal Palace is one of the symbols of Venice city. Distinguished by a style inspired by Byzantine and Oriental architecture, it is also known as Dogal Palace for being the home of appartamenti del doge.

Founded around 810 following the displacement of the seat of government from the island of Malamocco to the Rialto area, it initially appeared as a fortified structure at which corners towers were erected. Even today we don’t really know how Palazzo Ducale was actually structured, however, thanks to the first plan of Venice,it is thought to have been a rather different set of buildings to which access was gained through a fortified door that was placed about the height of the current Porta di Carta.

The Docal Palace and its structure 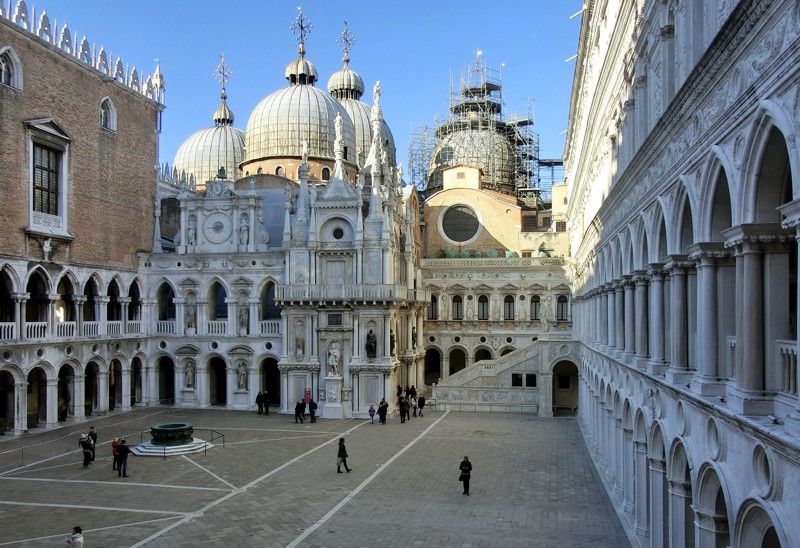 There are three large areas that distinguish the architectural structure of Palazzo Ducale: the oldest wing with Sala del Maggior Consiglio towards San Marco basin, Palazzo di Giustizia and Sala dello Scrutinio towards Piazza San Marco and finally the Renaissance wing with appartamenti del doge. Followed in the second half of 16th century by the construction of prigioni nuove e Ponte dei Sospiri. Over the years the building has been the protagonist of several fires following rebuilding that consequently modified its structure, the current appearance dating back only to the year 1577 when the fire took place in the Sala dello Scrutinio and Sala del Maggior Consiglio.

The visit of Palazzo Ducale 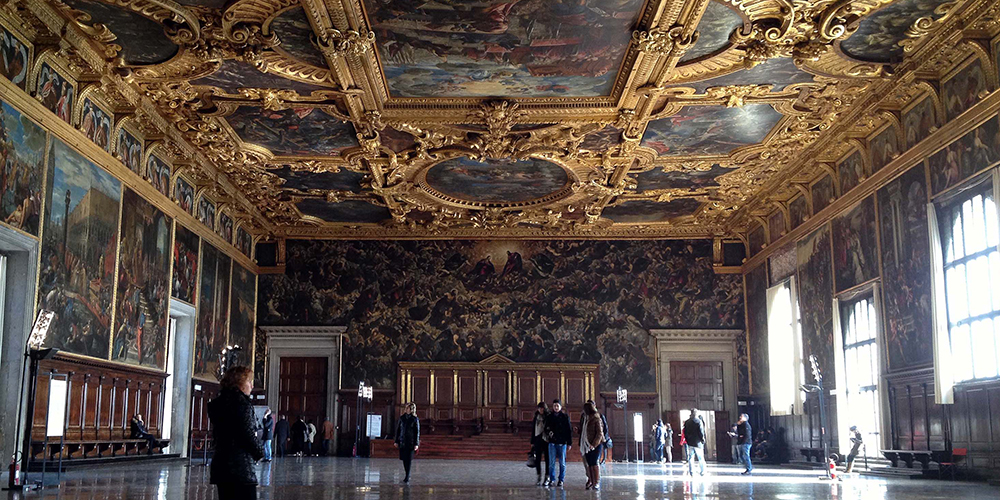 The visit to Palazzo Ducale begins as soon as you cross Porta del Frumento which is located on the south wing, the oldest in the building and which opens in front of the San Marco basin. From here the visitor will be accompanied directly to the courtyard which offers a view of the arcades and loggias. It is precisely at this point that one can understand that Palazzo Ducale is a collection of different styles, in fact if the southern and western inner facades have a Venetian Gothic appearance, the eastern one is characterized by a Renaissance style decoration. It is from the courtyard that you can access the loggias of the first floor through the Scala dei Giganti: so named for the two marble statues of Mars and Neptune placed at its sides that were to represent the power of Venice on the sea and on land. The imposing staircase is also remembered for having been the place where the ducal coronations took place.

At the top of the Scala dei Giganti we find the Piano delle Logge, in this it is possible to turn along the three wings of the building: east, south and west with views overlooking the Piazzetta San Marco and the courtyard. The loggias give the building an extraordinary sensation of lightness and overturning because the massive closed part, instead of being at the base, is above and the aerial and light below. In addition to the loggias in this floor there is another architectural marvel, the Scala d’Oro, which owes its name to the decorations in pure gold leaf and white stucco of the vault above it, made starting from 1557 by Alessandro Vittoria. Another characteristic decoration of the Scada d'Oro is represented by the frescoes of Giambattista Franco, dating back to the same period.

Having reached the first noble floor by means of the Scala d 'Oro, we find both the Ducal Apartment and the Sala del Maggior Consiglio. Surely the residence of the Doge is of inestimable value but we can also note that it was not so extensive, this because the Doge certainly represented the State but it was also its first servant. It often happened that the doge's family residence was much more sumptuous than the ducal apartment. In these rooms we will not find the original furniture because every doge had to provide the furniture and consequently, once he died he became the property of the heirs and then taken away. However we can admire in these rooms the pictorial decorations in which also Pietro Lombardo contributed to the realization.

The Sala del Maggior Consiglio instead was once the seat of the maximum Venetian magistracy which had the task of electing all the major offices of the state and legislating for the community. Considered one of the largest in Europe thanks to its enormous dimensions: 53.50 meters long and 15.40 meters high it has no supporting columns because the structural strength of the ceiling is achieved thanks to a system of trusses overhanging a magnificent decoration pictorial and coffered in gilded wood. when you enter this room the look is undoubtedly captured by the pictorial background decoration: it is Il Paradiso, a work by Tintoretto dating back to the end of the sixteenth century. Its extension of 22 meters in length and seven and a half in height makes it the largest canvas in the entire world.

The visit to the Palazzo Ducale ends with the exit from the Porta della Carta which is thought to take its name from the habit of posting laws and decrees there or from the presence of public scribes and archives of state documents. 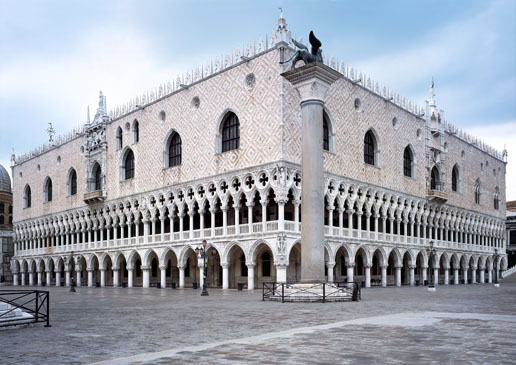 At the fall of the Republic of Venice Palazzo Ducale lost its governmental function and became first Biblioteca Nazionale Marciana, then Museum of the Opera and finally Civic Museum. Today this building is part of the Civic Museums Foundation of Venice (MUVE) and preserves inside among other things a large picture gallery of works realized by famous Venetian masters such as Jacopo and Domenico Tintoretto, Tiziano Vecellio, Veronese and others.

A stay just a few steps from the Palazzo Ducale: the Hotel Antigo Trovatore

For a dream stay in Venice, right in the city center, I recommend the Hotel Antigo Trovatore. Located a few meters from the Palazzo Ducale, easily reachable by taxi or public transport, it is located in Calle delle Rasse which takes its name, since the Middle Ages, from the production of rough wool blankets used for gondola cabins. the famous felze.

The hotel, which stands in an invaluable example of "minor buildings" of Venetian architecture, is characterized among other things by traditional beams, some rooms have access to a private terrace from which you can enjoy a breathtaking view of the Bell Tower of San Marco and the sixteenth-century facade of the Doge's Palace. All this combined with the beauty of their bright rooms furnished with a minimal and elegant style, modern and welcoming, which will make you experience the excitement of Venetian life.

From the very first moment you enter the Antigo Trovatore you will notice the meticulous attention to details and services offered, not always discounted, such as the luggage storage, the variety offered during the breakfast buffet and the multilingual staff available 24/7.

At this point I would say that the Hotel Antigo Trovatore, with its excellent value for money, is the ideal solution to stay a stone's throw from one of the most beautiful squares in Europe.