Venezia 77, Day 11: and the winner is Nomadland di Chloé Zhao

The 77th Venice International Film Festival in its most difficult edition has ended. And it is promoted with full marks! The love and passion that La Biennale has shown for this art of cinema, the undoubted courage to challenge a hostile time, were truly moving and stimulating. A miracle that has more to do with the terrain than with the mystic because what happened was real. Magnificently real!

But we will return to this aspect, now let's go straight to the heart of yesterday's evening.

The Award Ceremony opens a fluid passage from past to present to project itself in the time to come. We start with a touching reading by Matilde Gualtieri who recites the poem Nine March 2020, the date that changed everyone's life by starting the lockdown, to remind us of the past period that has marked history and that has forced this edition of the Exhibition to dress in a singularity that we would have gladly done without.

of a palm with someone's palm

to that simple act that is forbidden to us now

we will return with a dilated understanding.

We will be here, more careful I think. More delicate

our hand will be inside the making of life.

Now we know how sad it is

stay one meter away.

A reflection on the human condition forced to rewrite its rhythms and to be more aware of a humanity that was getting lost. A hymn to rebirth, but that this is not indifferent to the sad life that has just passed, so that this becomes a warning for a more conscious life of what we possess of precious things. The best closure for an edition that had to rewrite its rules in order to be there, in order to win a very difficult challenge at the beginning.

We return to the present with the songwriter Diodato who invites us to live and enjoy the moment "because now is all we will have", enchanting everyone with an intimate version of his Adesso.

Then comes on stage the godmother Anna Foglietta, one of the best godmothers that the Festival remembers, who visibly excited, calling us "all kings and queens of a magnificent kingdom: the cinema" urges us to treasure the beautiful emotions experienced in these days and to keep them within us "somewhere between head and heart" for tomorrow when we will be orphans of the beauty of the Festival.

From then on the evening with the most awaited moment, that of the awarding of prizes. The Golden Lion as best film of this edition goes to Nomadland by Cholé Zhao, a very intense film that tells the life of modern nomads, by choice or necessity, who often find themselves to be "the last". In fact, the film was included in the selection of participants in the Venice Competition77 only the day before the closing of the nominations: once again, life teaches us that often the last ones become the first. The entire cast was absent and therefore could not collect the prize. Only a thank you video in which the director appears with the lead actress Frances McDormand, in the desert of Pasadena with the camper behind her, which has become a characterizing element of the film's narration.

Zhao's film beats Gianfranco Rosi's Nocturne favorites Notturno, Susanna Nicchiarelli's Miss Marx and Michel Franco's Nuevo Orden, to whom the Silver Lion goes. Italy triumphs with Pierfrancesco Favino who wins a well-deserved Coppa Volpi for the male role in the film Padrenostro, and with Pietro Castellitto who in the Horizons Section won the Lion for best screenplay for his I Predatori. Mature and lucid his speech of thanks dedicating "the prize to those who do not think like me because only by legitimizing the other you can have an exchange. The competition is with history, not with our time". A warning without doubt current.

The Special Jury Prize goes to Russian Andrej Konchalovsky with Dears Comrades!, and the Lion for Best Director to Kiyoshi Kurosawa for Wife of a spy. Coppa Volpi for the best female interpreter goes to Vanessa Kirby for Pieces of a woman. 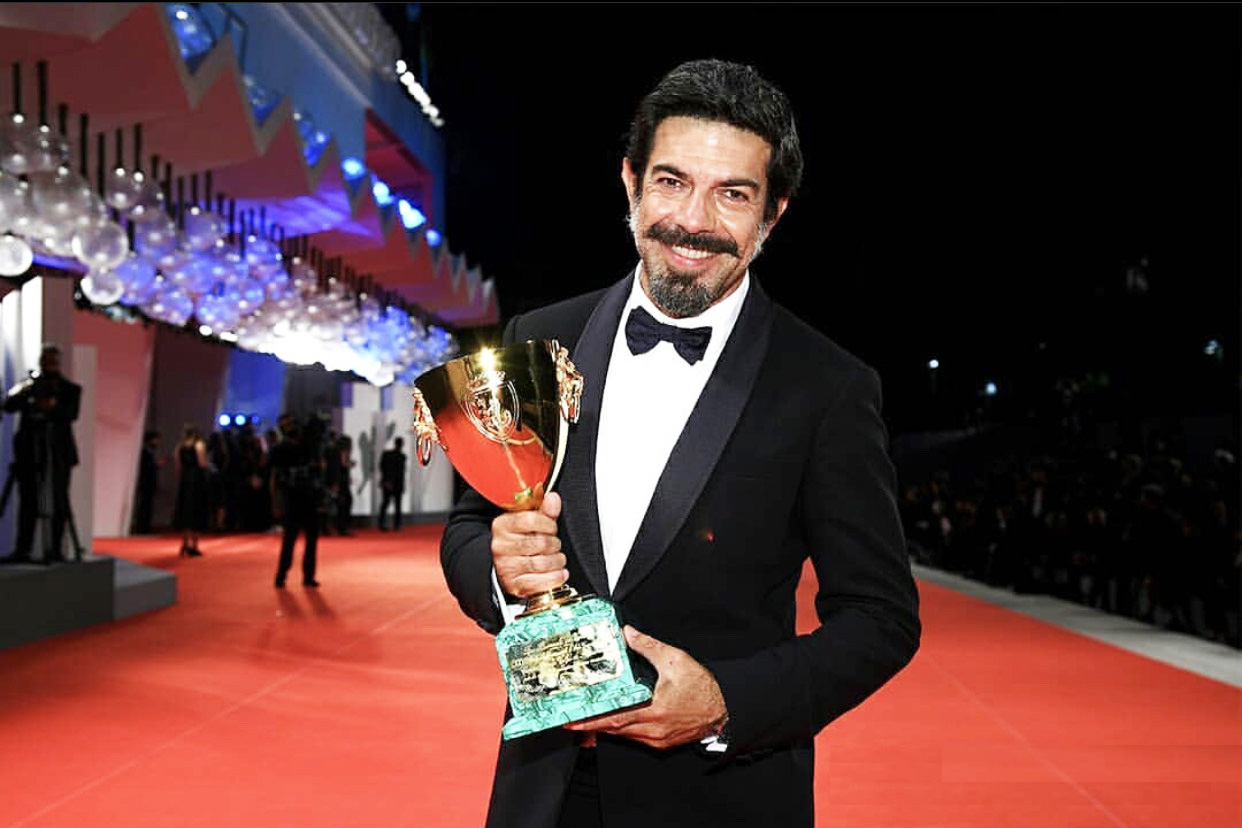 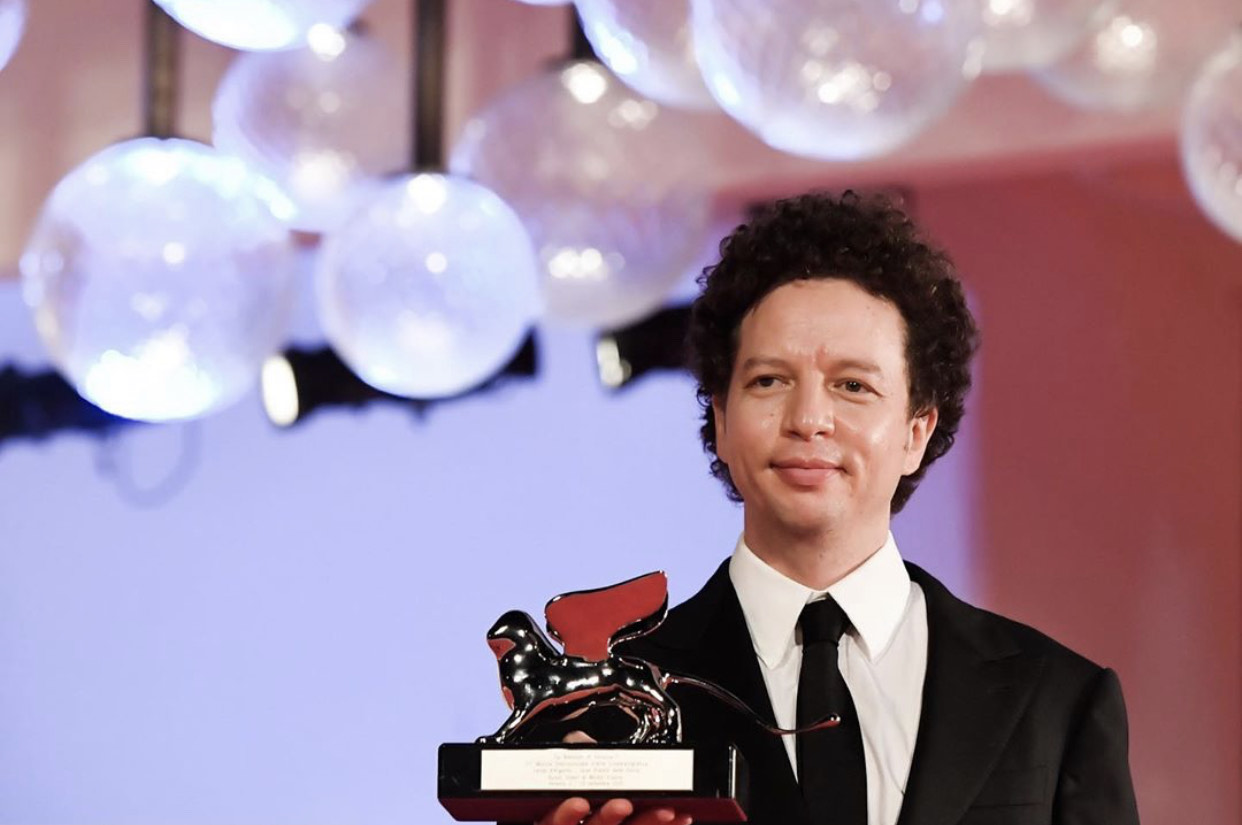 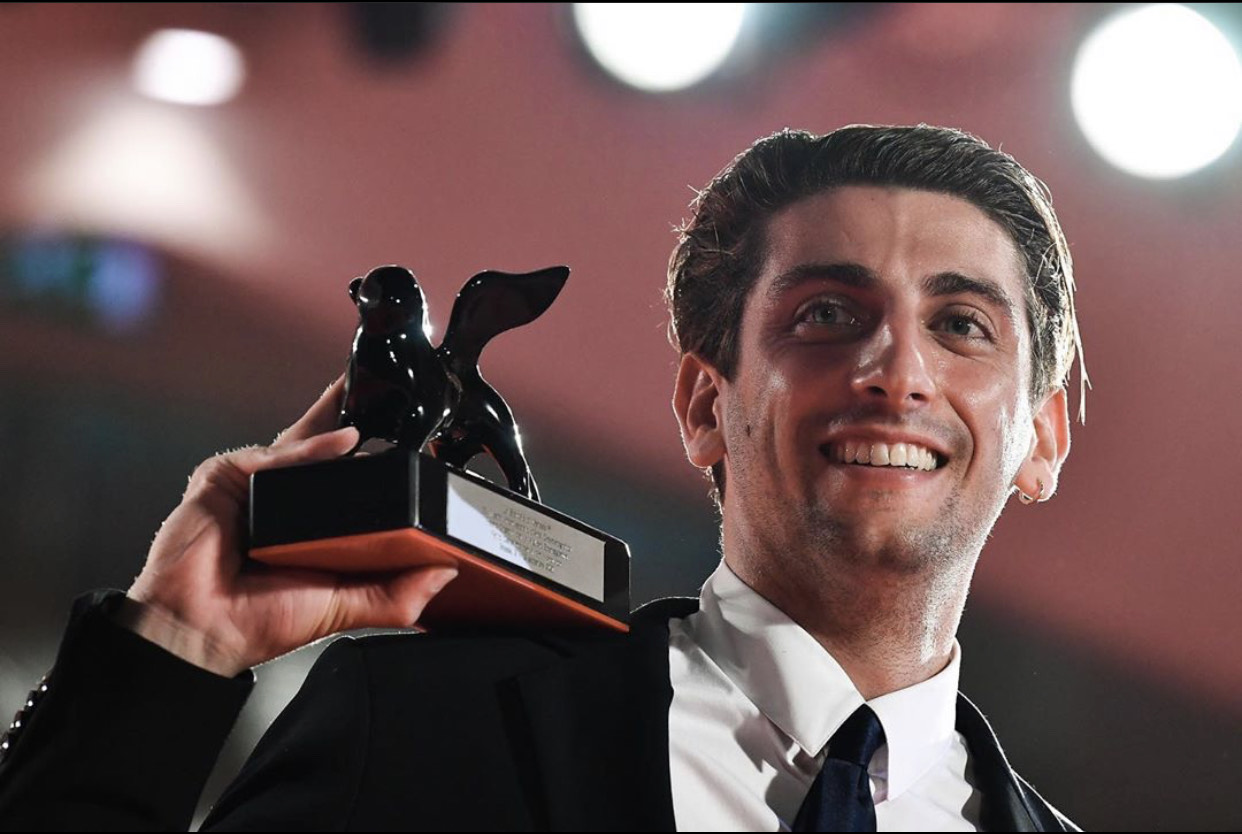 But let's see all the prizes of this Venice77.

The last day of this 77th edition of the Venice Film Festival opened with the screening, obviously out of competition, of the film Lasciami Andare by Stefano Mordini. The film was entirely shot in Venice and thus closes a circle of this historic lagoon festival that opened with the screening of Molecole, a documentary of the city at the time of the lockdown.

Mordini's work has a truly exceptional cast: Stefano Accorsi as Marco, Serena Rossi as his wife Anita, Maya Sansa as Marco's ex-wife, Clara, and Valeria Golino as Perla, a key character in the narrative.

Marco and Clara lose their son Leo in a tragic accident. As often happens in these cases the couple cannot resist the shock that the death of a child generates and separates. Marco reconstructs his life alongside Anita, who then discovers that she is expecting a child. Life seems to start again, but in everyone's life suddenly appears Perla, the woman who bought the house where Marco and Clara lived with the baby and where the baby dies. This woman, wrapped in an incredible halo of mystery, an ambiguous character, contacts the two to confess to them that she feels a constant presence in the rooms of the house and to hear the voice of a child. This news is a hard blow for both of them, but above all it shakes Marco, sucking him into a past from which he is constantly trying to escape: he realizes that he has never really grieved for the loss of his son, tormented by heavy feelings of guilt, he struggles to write a future without ever having closed the book of the past. So a thriller takes shape that becomes a journey, a sinuous path like water in search of the truth. But what truth?

And water is the main element of this story, which is why Mordini chose Venice for the setting of his story. But the Venice of the film is a city that is as true and real as ever: the film, in fact, was shot last fall, when the city suffered the wave of aqua granda whose images are in everyone's eyes. Faced with that obvious complexity, the director's choice was to stay and shoot even in extreme conditions, with a city on its knees: a way to support its citizens and its economy in a difficult moment. This created a special sharing between set and city, between operators and citizens, which emerges with all its magic from the scenes of the film.

"In reality, the film - explained the director - works more than on mystery and the invisible, on the thousand expedients that one creates to overcome pain, to continue to hope. After all, I think Let me go, above all, a love story. There are houses in Venice where the sun, passing through cracks, holds the image of what it meets and reflects it on the walls. The process is that of the darkroom. In one of these houses Marco and Clara lived and in that image of a water channel, crossed by wooden boats and some gondolas, something more than a simple landscape is reflected. In the folds of the light, looking more carefully, you can discover something else. It is from there that the camera moved in search of little Leo, to help him go". 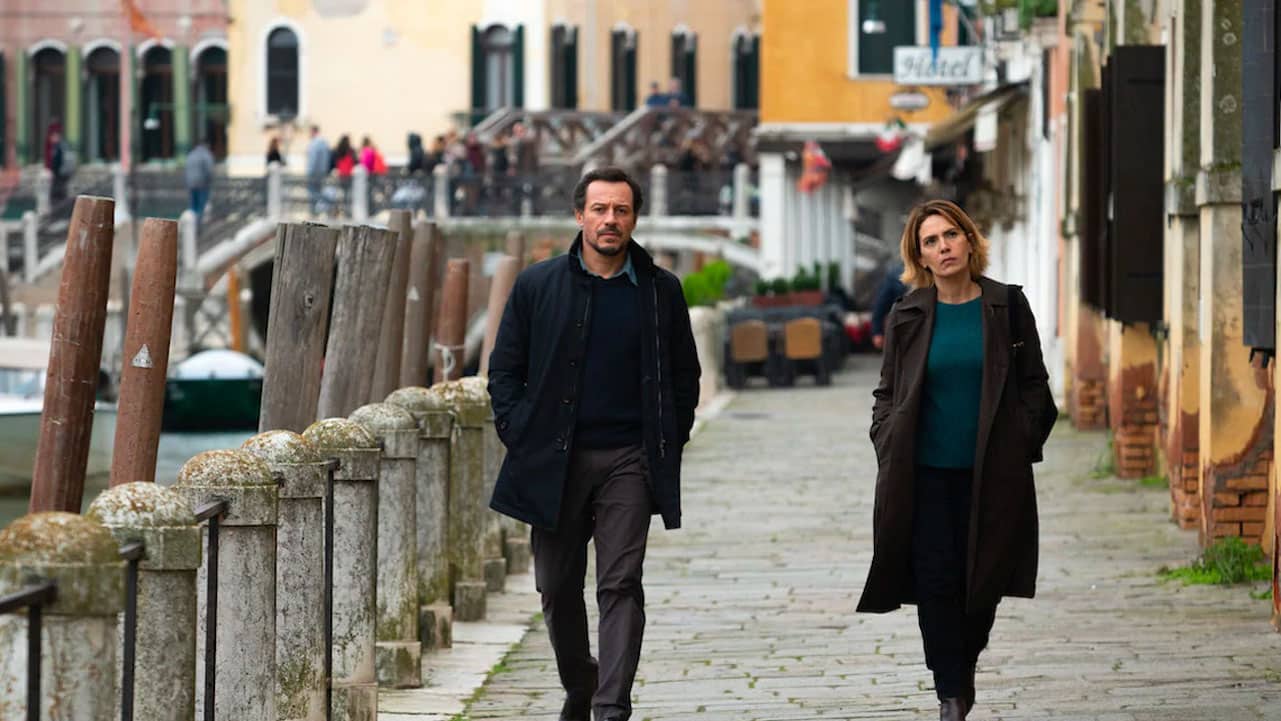 Thus the curtain falls on Venice77. Among all the prizes awarded yesterday in the Great Hall, the most important Golden Lion, let me say, goes to Roberto Cicutto, president of La Biennale, and Alberto Barbera, director of the Venice Film Festival of this historic edition, deserving of having done something truly extraordinary. We all thought it was madness when both of us, in the middle of a pandemic, announced that the Film Festival would take place on the dates already set. We all wondered how it would be possible to organize such an international event as La Biennale Cinema at a time when the whole world was fighting against a common and invisible enemy. Like the acrobats of the poster for this edition 77, we moved between skepticism, disbelief, enthusiasm and curiosity. We feared that an event like this would create a crowd and that it would easily spread the virus. Someone was afraid of failure, maybe they hoped for it.

And instead, the 77th Venice International Film Festival La Biennale di Venezia was a triumph! It showed everyone that with stubbornness and obstinacy, the courage, the right choices, the right organization studied down to the smallest detail, you can return to a normality that we deserve after all. This edition of the Exhibition, which has gone down in history even before it began, has certainly laid the foundations for the events to come, becoming an example to follow. On the other hand, the Serenissima Venezia, a city that has stolen land from the sea, in its history has always taught us tenacity.

And so everything has worked perfectly, from compliance with safety regulations, theaters and screenings tripled, and online booking of seats for movies to see. There was no lack of charm, glamour, the dream that the Venice Film Festival has always brought with it.

It's true, this year there have not been the great titles from American billboards, the Hollywood stars, but the great cinema has been the master with auteur proposals and not extremely interesting, surprising discoveries that I'm sure we will find in the international film scene, films that will accompany us for most of the season.

The thanks, as President Cicutto said from the stage last night, also goes "to all those accredited and to the public who contributed to the success of the event with their sense of civil responsibility".

The Biennale has performed a small great miracle, staging the best plot: you can live with the virus, you have to live with viruses. And you can do it enjoying an extraordinary normality that has given us what we have all been waiting for a long time: the return to the hall!

This is the end of our trip to the Venice Film Festival 2020 - Venice 77 where we tried to bring you every day, telling you what was happening on the Lido, introducing you to the films and characters that have animated these 11 long and intense days.

Tired but happy, like Barbera, for this incredible experience.

And let's hope it will be without mask

Good cinema to everyone!